Do you know someone who has had or needs to get an MRI (Magnetic Resonance Imaging) scan? Have you wondered how authenticity is ensured in food samples [1] or how scientists can get molecular structure of compounds found in nature? If you have wondered about any of these things, then some of your curiosity will be satisfied by learning about spectroscopic methods such as Nuclear Magnetic Resonance (NMR) spectroscopy which involves the same principle as MRI. As an expert in magnetic resonance (MR) technology, RS2D provides instrumentation for both MRI and NMR analysis. But what is the difference between an MRI and an NMR spectrometer, and what do these acronyms stand for?

MRI, Magnetic Resonance Imaging, and NMR, Nuclear Magnetic Resonance spectroscopy, are analytical methods based on the same physical phenomenon: magnetic resonance (MR).  MR is a research technique using the magnetic properties of atomic nuclei. It detects molecules and provides us with information about its chemical and physical properties.

MRI is a medical imaging technique to observe living organisms in 2D or 3D, at the tissue and organic scale. Clinical MRI is for humans, while preclinical MRI is for small animals. NMR is a spectroscopic technique for studying molecular structure at the atomic scale.

In MRI, we only observe tissue and organs, through the hydrogen (1H nuclei) resonance present in fat and water. Most MRI system are design to target hydrogen due to its abundance in soft tissues so for those interested by in-vivo imaging. In NMR, scientists typical rely on hydrogen too (also called proton in the context of NMR), given its abundance in organic matter, but also where appropriate, they can also observe other nuclei with spin that can interact with a magnetic field (13C, 15N, 31P, 19F…). All these NMR observable nuclei can provide atomic and molecular information (configuration, conformation, interactions, …). Subsequently, NMR and MRI are used in many areas, including medicine, chemistry, biology, physics, research, food analysis. A future article will be dedicated to magnetic resonance applications.

Then, if the physics and the observed nuclei are the same, in practise what is the difference between MRI and NMR? To have an idea, let’s have a look at the picture 1. 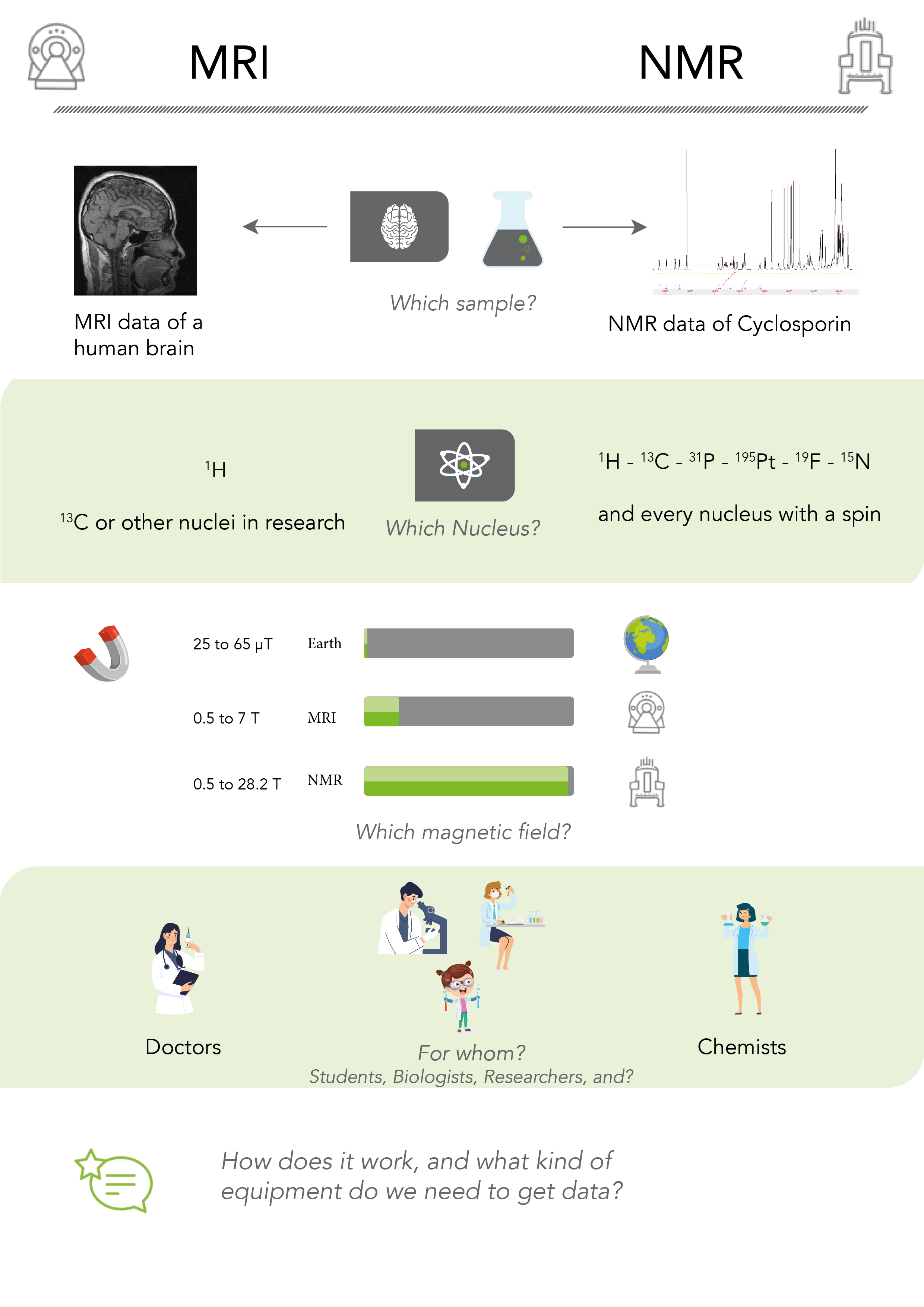 The first main difference between MRI and NMR is the sample. Of course, we are studying the same nuclei, however in MRI we mainly do experiment on living tissues like animals, humans, or plants and vegetables. In NMR, the sample is composed of a liquid or solid compound inserted in a tube or a small rotor, respectively. Another main difference between these two techniques is the magnetic field strength. In NMR, as we are typically analyzing non-living samples, the magnetic field can reach high(er?) levels than when it’s used for research biology purpose, for example. NMR is also miniaturized for accessibility, affordability, and teaching in processing or industrial QC/QA lab. In 2022, the highest working NMR spectrometer magnetic field reached 28.2 Tesla [2], whereas the highest working MRI magnetic field was only 11.7 Tesla for human, 0.5 Tesla to 7 Tesla in clinical routine. For a comparison element, you may know that the Earth magnetic field is around 26 to 64 micro-Tesla. See Picture 1

« The simplified definition of tesla describes only the magnitude (B) of the field at a given point.  If the field is perfectly uniform, B is the same at all points within the field.  In general, however, the structure of the magnetic field is more complex, and B may have different values and directions of action at different points in space. A magnetic field is therefore formally defined to be an array of vectors (denoted by the boldfaced letter B) whose magnitude B and direction at each point in space define how the field will act on a charge moving at that location. »

So, now, let’s see how they look with the material description below. 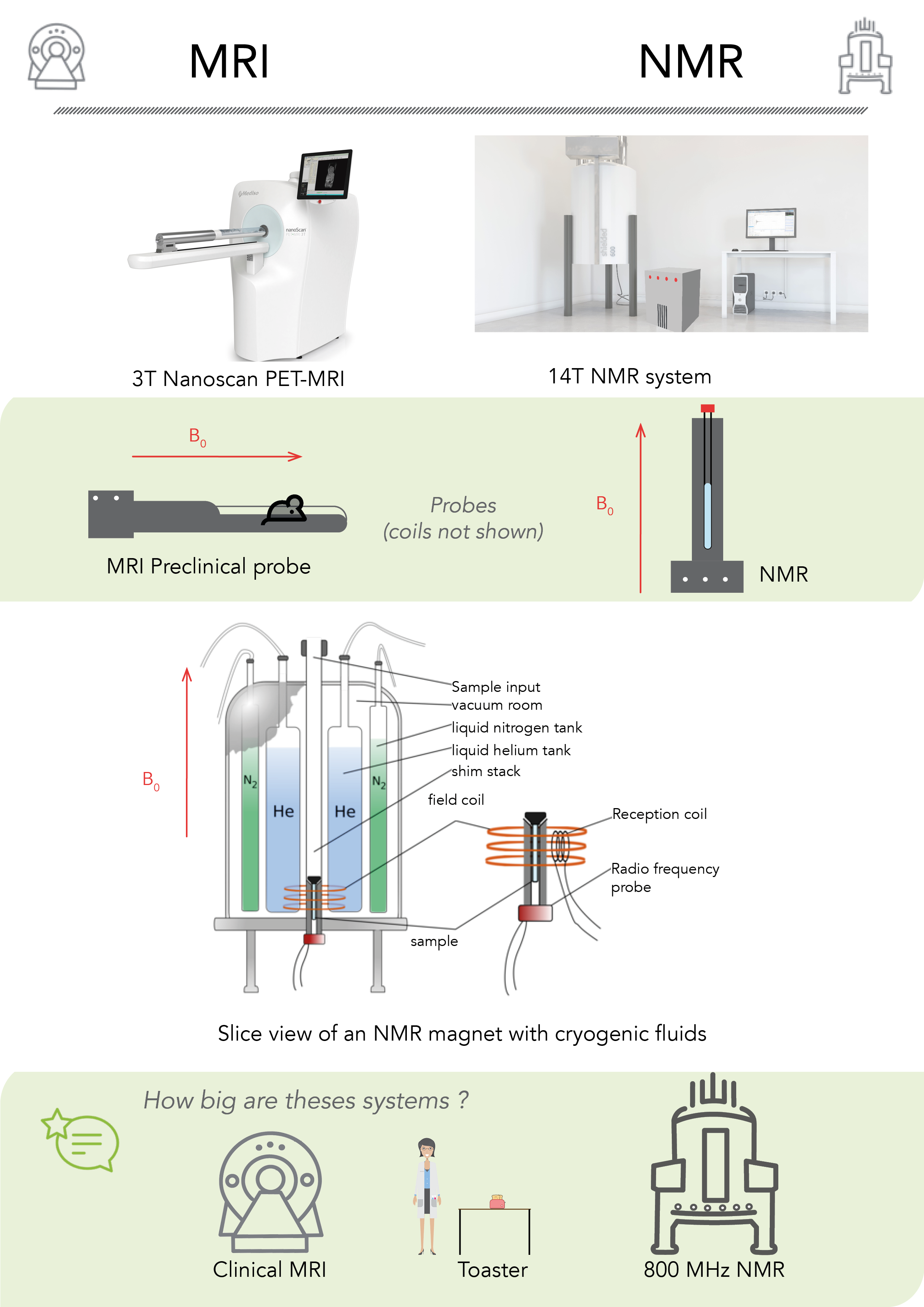 NMR and MRI spectrometer are composed of a main coil producing a high magnetic field (B0), a persistent superconducting magnet. Magnetic fields occur whenever charge is in motion. As more charge is applied, the strength of a magnetic field increases. To ensure this high charge, the coil needs to be kept at 4 Kelvin (-269 °C). This low temperature is maintained by using cryogenic fluids: a liquid helium Dewar where the coil is immersed and a second outside Dewar of liquid nitrogen (77 K, -196 °C). See Picture 2

The sample is placed in a probe (or the probe is put around the sample, for body MRI as an example) then introduce into the magnet. The probe is a metal tube which is inserted into the bore of the magnet. The probe is used to hold transmit and receive coils close from the sample and the main coil, to detect the MR signal. In MRI, there are several kinds of RF coils. Standard body coils are a permanent part of the system, head coils are incorporated into a helmet and are used for head images, local (or surface) coils are small and only receiving coils, they are placed as close as possible to the area to analyze. In NMR, probes are defined by their sensitivity to 1H or X nuclei, and the number or channel they have.

The last component is an electronic platform, typically referred to as a console, which is mandatory to acquire data. RS2D developed its own console, designed for a wide range of NMR and MRI products, providing power and flexibility to these systems, the Cameleon4TM.

From an MRI point of view

MRI is an imaging technique that studies the magnetic properties of hydrogen nuclei. Indeed, although they only represent 10% of the body’s mass, hydrogen atoms account for 86% of the chemical composition of the organism. Hydrogens are mainly distributed in the water and fat molecules. As mentioned earlier, we need to insert a sample in a magnet, however, when I place a magnet on my water glass, nothing happens. So, how may a magnet act on a hydrogen atom to provide us MRI images?

From this statement, we will need some physics, and discuss about magnetic resonance to go deeper and emphasize how images are produced.

The magnetic resonance is an effect that appears when a magnetic dipole is placed in a static magnetic field and excited by another electromagnetic field. To find out how this is working, let’s discuss nuclear spin and magnetic moment [3].

The nucleus of an atom can be considered as a positively charged sphere and rotating on itself, named proton. Each proton has an axial rotation called precessional motion or spin. The rotation of these charges induces a small magnetic field called nuclear magnetic moment and denoted:

A proton can thus be likened to a small magnet with a south and a north pole. This magnetic dipole is characterized by its quantum number of spin, noted I which can take various values. The spin quantum number I is determined by the contribution of each of the elementary particles which constitutes the nucleus of the element. Only nuclei with odd number of charges having an isolated proton have magnetic properties. 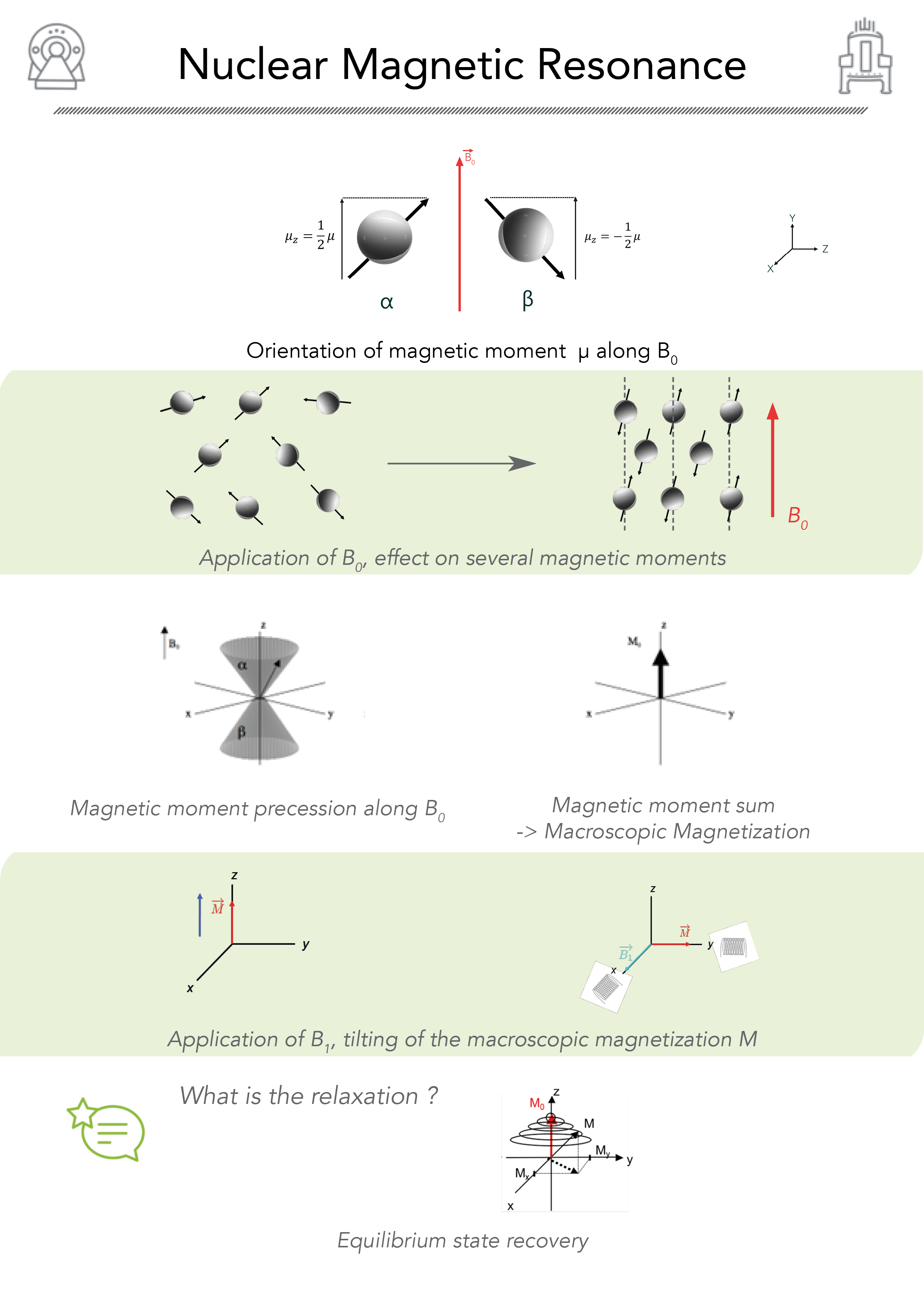 A nucleus with an even number of protons will have same numbers of magnetic moment in each level (parallel and antiparallel), when a nucleus with an odd number will have n magnetic moment oriented in one level and n+1 oriented in the opposite direction. The few protons in excess at the parallel level will see their microscopic magnetization add up to a macroscopic magnetization noted:

In MRI, the study of this macroscopic magnetization will allow us to obtain body images, when it’ll provide spectrum in NMR.

These magnetic moments are now aligned along B0 axis; however, they are not perfectly aligned on the B0 axis. They rotate individually around this axis by describing a cone, we call this phenomenon the precession. Their precession angular frequency is related to the magnetic field strength (B0) and the specific gyromagnetic ratio of the observed nucleus through the Larmor relation. The gyromagnetic ratio is a constant one can found in theory tables.

The magnetic field B0 is so important compared to the magnetization M, that it’s impossible to study M in this state. We gone need to tilt it to add a transversal component to be able to observe this magnetization. This tilt is done with an external energy in a form of a radiofrequency pulse (B1). The B1 is created in the probe thanks to a radiofrequency coil, and conventionally applied along the x axis and named a pulse. Then M will flip along y and a reception coil is placed also along y.

When B1 pulse is finished, the magnetization M tends to recover its equilibrium state along B0. As a reminder, B1 is a RF pulse applied one-time, as B0 is a permanent field and can’t be turned off.

The signal recorded with the reception coil along y axis is called an FID (Free Induction Decay); It is a sum of the free precession signals of each of the nuclei returning to thermodynamic equilibrium with their own frequency. Unfortunately, this FID signal can’t be interpreted like this. 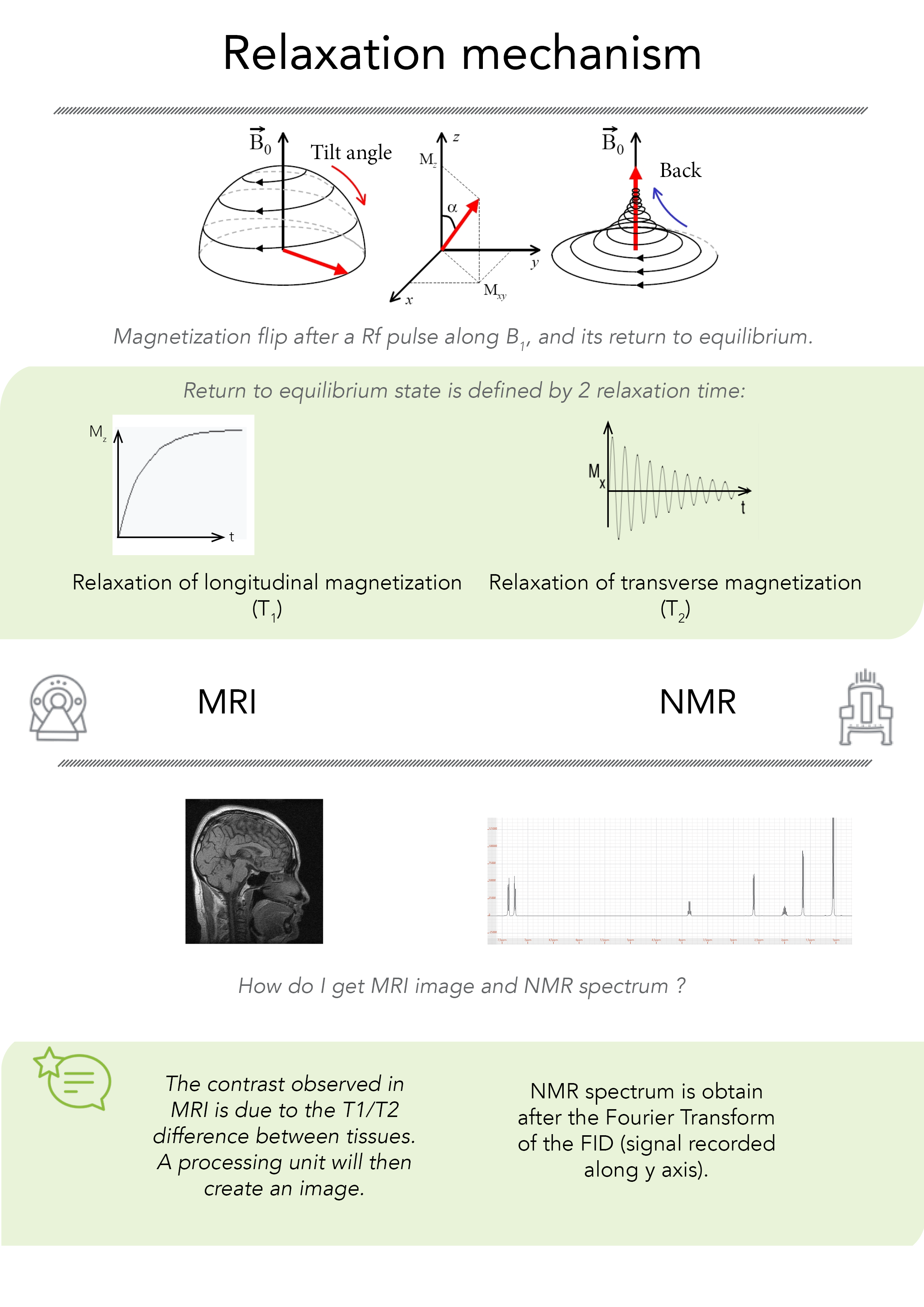 Similarly, the recovery of the Mz component, representing the longitudinal magnetization, is characterized by the longitudinal relaxation time (T1). This time constant corresponds approximately to the time needed to recover 63% of its maximum value. See Picture 4

To obtain a spectrum, the FID must be mathematically transformed (deconvoluted). This is done by the Fourier Transform, which allows to change from a function in time (t in seconds) to a function in frequency (ν in Hertz). The main benefits are the signal accumulation, multidimensional experiment can be carried on and a coherent action can be realized on several spins. See Picture 4

We use cookies to ensure that we give you the best experience on our website. If you continue to use this site we will assume that you are happy with it.OkNo